What does it mean when you have a herniated disc in your back?

At least 80% or more of people will experience back pain at some time during their life. One common cause is a lumbar disc herniation. Most frequently this occurs at the lowest two levels, L4-5 and L5-S1, where most of the forces in movement are greatest. 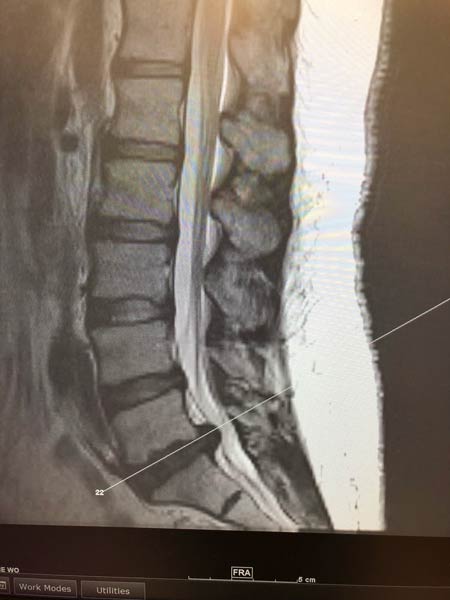 The disc is made up of two parts: a thick outer capsule called the annulus, and a soft center called the nucleus pulposus. Degenerative processes in the disc cause drying out of the nucleus, making it a less efficient shock absorber during movement. When a tear occurs in the annulus from injury or natural wear, a piece of the degenerating nucleus may bulge or even emerge completely from the disc space and enter the spinal canal. The herniated disc usually has a consistency similar to crabmeat. 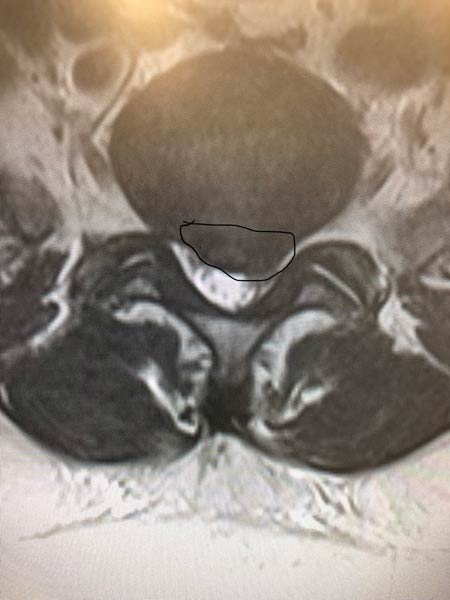 When a piece of the disc nucleus is displaced into the spinal canal, it can produce symptoms due to the pressure it places on one or more nerve roots, as well as through inflammation caused by released chemical mediators. This leads to symptoms that can include sudden onset of back pain that may be associated with pain, numbness, and tingling that goes down one leg. This is often referred to as sciatica, as these nerve roots together form the sciatic nerve. A patient will usually be able to describe the pain as involving a particular distribution that corresponds to the specific nerve root that is compressed. This may be associated with muscle weakness.

The majority of patients with acute back and leg pain, numbness, and tingling will improve with conservative treatments. These include anti-inflammatory medications such as a steroid dose pack or non-steroidal anti-inflammatory medications like Ibuprofen, as well as a course of supervised physical therapy for approximately 6 weeks. Mild prescription pain medications or muscle relaxants may diminish symptoms. Sometimes steroid injections into the epidural space can reduce local inflammation around the nerve root to reduce pain. Surgery may be required early in patients who have associated weakness in a muscle or in patients who do not respond to conservative treatments. It is important that patients with significant muscle weakness realize that with prolonged pressure continuing to compress a nerve root in the face of weakness, permanent damage can occur. In these situations, if surgery is done too late, that damage may not improve. Ideally, the principal role of surgery should be viewed as prevention of permanent nerve injury, as well as elimination or reduction of pain, numbness, and tingling. The decision to operate should be made in a patient who has back pain and radiation along the distribution of a lumbar nerve root with an imaging study such as an MRI that shows compression of that exact nerve root on that side. There must be an anatomic correlation between clinical symptoms and an imaging abnormality to justify surgery. There are many patients who have MRI scans which show bulging discs but have no symptoms, and these patients should NOT be operated on. 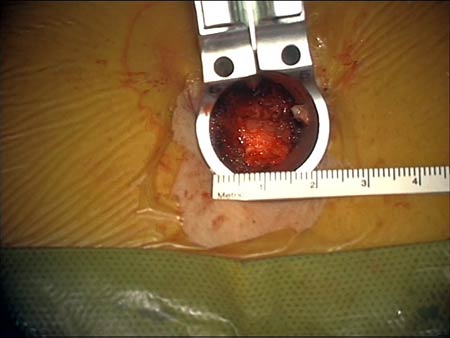 Surgery for a herniated disc can be done in most patients through an incision usually smaller than one inch. A small cylindrical trajectory is created to reach the spine, and a minimal access drill hole made in the bone to allow access under magnified vision to the herniated disc fragment and compressed nerve root. Removal of the herniated fragment and any other loose material is performed. The skin is closed with dissolving sutures, and a bandaid is applied. Patients are able to walk as soon as they are awakened from anesthesia. Depending on occupation, return to work can be as soon as several days to a week. In general, most patients will feel an immediate relief of pain as long as the nerve has not been damaged byprolonged compression. 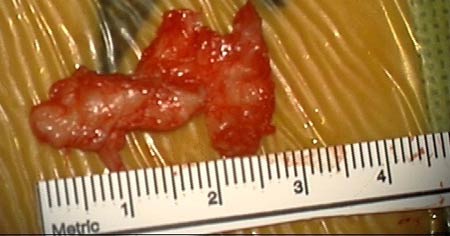 Figure 4. Large piece of herniated disc that was compressing nerve root is removed from the spinal canal. This large fragment was 2.5 cm in length.

While surgery is sometimes necessary, it is important to be patient and allow the body to heal itself naturally with the help of conservative methods. Some of Dr. Stechison's popular epithets are:

This means avoiding fusions and altering the mechanical function of your spine unless absolutely necessary. 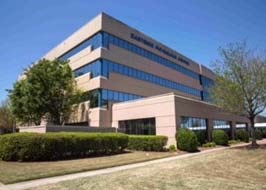