Colloid Cyst of the Third Ventricle

This CT scan shows a small hyperdense lesion marked by the crosshairs. This is a colloid cyst. A colloid cyst is a benign lesion that arises from a vestigial brain structure called the paraphysis. All colloid cysts of the brain occur in this same exact location. They are attached to the roof of the third ventricle, and when large enough they will block the foramina of Monro which connect the lateral ventricles to the third ventricle. This type of benign tumor is sometimes discovered as an incidental finding when someone has imaging of his or her brain done. Other times, a patient may have hydrocephalus, an obstruction of the spinal fluid channels deep in the brain. Very rarely, a colloid cyst can produce sudden death. This is its most serious manifestation. For this reason, most colloid cysts, particularly larger than 10 mm, should be considered for surgical removal. This is a dangerous surgery that must be done by an experienced neurosurgeon accustomed to microsurgery of brain tumors. There is a significant risk of permanent memory impairment if the structure called the fornix, against which the colloid cyst is pressing, is manipulated or damaged in any way. Surgery may be done through a minimally invasive frontal craniotomy with the microscope or using a ventriculoscope.

The video below shows a colloid cyst being removed. The cyst is the brownish smooth structure. The contents are usually a viscid, gelatinous, or honey-like material. In the video below, the surgical instrument points to the fornix. The large septal vein is visible; the tiny pink nodular tissue behind and to the left of the instrument is the choroid plexus, the structure that makes cerebrospinal fluid.

A postop imaging study should be done showing that the colloid cyst is totally removed. 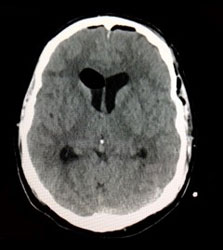